The Telford Trail is organised by the South Telford Rights of Way Partnership. It is a 12 mile (approximately) long-distance, fully way-marked, circular walk through some of the most beautiful and historic urban countryside in South Telford.

The Telford Trail provides the opportunity for participants to complete a walk for pleasure or as a way of raising money for charity or a community group (open sponsor forms can be provided).

To support charitable aims, the three individuals who raise the largest amount for a charitable or community cause (excluding match funding) will receive a £100 gift voucher. There will also be a 2nd & 3rd prize of £50 & £25 gift vouchers.

At last evening’s Parish Council meeting, the Chairman reported on a meeting held with Mr. Careless and the MD of Horsehay Ltd where an alternative, diverted route, had been tabled. Following discussion, it was RESOLVED to accept the tabled diversion of the footpath from Bridge Road to the Travellers Joy public House as discussed with Mr. Careless, Senior Rights of Way Officer, and the Managing Director of Horsehay Limited at the meeting on Friday 16th January 2015; that the Parish Council was willing to withdraw those claims and evidence, submitted by members of the public on behalf of the Parish Council, for the continuation of the (blocked off) original route of the B.O.A.T.; that the decision was entirely subject to the caveat that Horsehay Limited agreed to whatever conditions the Borough Council required in order to secure the land of the alternative route as a public right of way and that they also agreed to the condition that the route was secured on the definitive map; that subject to their agreement, the Borough Council, through the Senior Rights of Way Officer, would then proceed without undue delay to secure the route and place it on a legal footing as a definitive route to protect it in perpetuity; that once the route has been secured as a definitive route, the Parish Council would have no objection to an immediate time limited suspension of the route to allow necessary works to be carried out on the site.

In agreeing to the resolution, Members hoped that it would then enable the route to be secured as a definitive route without too much further delay and that members of the public would soon be able to resume their practice of walking along this long used route.

This is just a short note to let interested residents know that Dawley Hamlets Parish Council has been offered, by the site owner/developer, an alternative route (diversion) to the old byway from Bridge Road to the Travellers Joy and that the matter will be discussed at the Parish Council meeting to be held this Wednesday evening 21st January at Horsehay Village Hall at 7:00 pm. 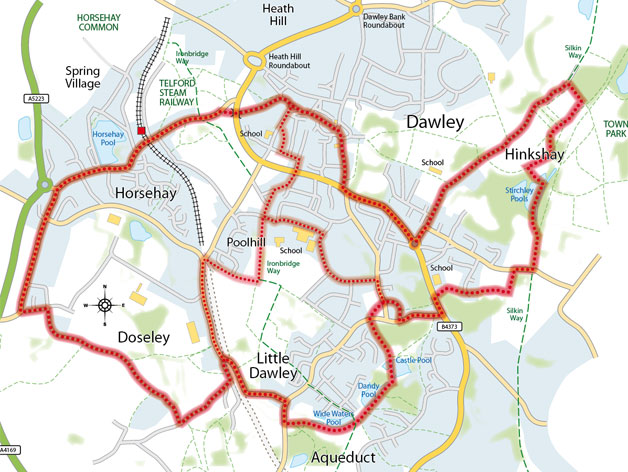 The website describes the walk as  being a “self-guided heritage walk which aims to bring alive much of the parish’s rich history and culture. On the ground is a wealth of surviving buildings, artefacts, and often humble commemorations to an era of industrial enterprise, as well as the lives of important local characters.

Nature has softened – and at the same time enriched with wildlife – much of this industrial legacy, including that of the pit mounds, but from the number encountered on this walk it is possible to imagine the scale of the collieries that once characterised so much of the Dawley landscape. At the Castle Pools you might pause a moment to picture in medieval times a castle that once stood there, or, as you walk along, take in the lines of old tramways, follow canals, imagine the once busy activity at long-silenced wharves and railway platforms.

There are churches and chapels, the places of squatters’ cottages, the site of a natural spout , furnace pools, a cinderhill, and a pottery where you wouldn’t have expected one, all with their own fascinating and often socially important stories to tell. There are memorials to tragedies, and also plenty of historic houses, buildings, monuments to mark some of Dawley’s prominent individuals, such as Captain Webb, William Ball ‘The Shropshire Giant’, and more recently, Edith Pargeter, the author ‘Ellis Peters’ of the Brother Cadfael stories.”